Emerging centuries ago as a sand islet in the middle of the Thu Bồn River, Cẩm Nam Commune has been known by several names: Cồn Hến, meaning mussel islet, and Cồn Bắp, maize islet. It has drawn migrants seeking lives as successful peasants since the late 14th century. The commune, 3km south of Hội An ancient town, has now become an eco-tourism destination with tranquil rural scenery and traditional farming on the river banks. Bùi Hoài Nam reports.

Cẩm Nam Commune rises up on a 3km-long islet in the middle of the Thu Bồn River, dividing the lower section of the longest river in Quảng Nam Province into two branches.

The commune with a population of 6,700 is sandwiched between Hội An town and the Duy Vinh fishing village in Duy Xuyên District.

Previously, Cẩm Nam residents travelled only by boat to exchange farm produce and fished for food for the Hội An market. A bridge was built in 1995.

Maize is grown on 10 per cent of the commune’s crop land, along with profitable chili, ground-nuts and beans, creating a stable income of more than VNĐ100 million (US$4,400) each year for 100 households. 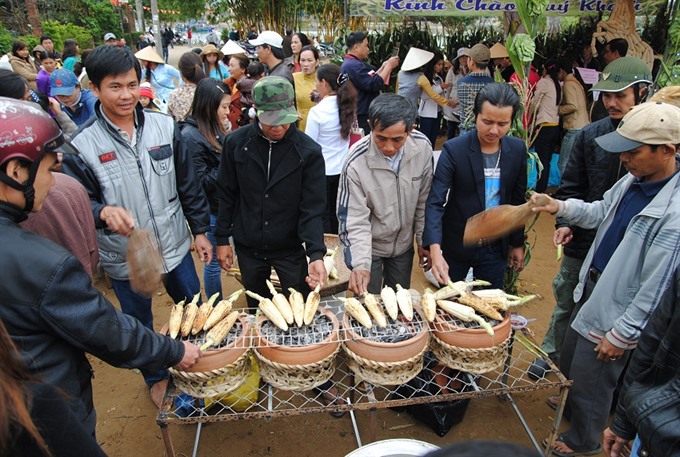 Nguyễn Mới, 69, said farming and fishery had remained the major trades in the village since the 14th century.

“Farming has been the major job for generations, and it still creates good income for us. I could earn good income (about $4,800) from rotating crops of maize, ground-nut, chili, melon and bean on a 7,500sq.m farm,” Mới said, adding that rice cannot grow well in the area. “Maize has been a major crop and a trademark of the commune since it has been grown as a main food for villagers for centuries.”

Đỗ Xuân, 65, said maize is usually grilled or boiled for snacks, but villagers have also created various dishes with maize such as milk, spring rolls, wine, and sweet pudding.

Xuân said more than 10,000 pieces of corn on the cob are used at the annual festival on the 20th day of the first lunar month – the day that villagers host a ritual praying for a bumper harvest.

“The annual festival has been promoted as an event to lure tourists since 2014. Tourists can find a rural, tranquil and scenic site for rest at the weekend and a unique cooking style emphasizing white maize,” he said.

He said maize farming could draw tourists, just as vegetable gardens have lured visitors seeking to learn about food cultivation and cooking techniques in Trà Quế Village, east of Hội An town.

“Tourists often pedal from Hội An town to our farms, and they are invited to do farming with us. The tranquil village offer tourists a quiet site away from the hustle and bustle of Hội An,” he said. 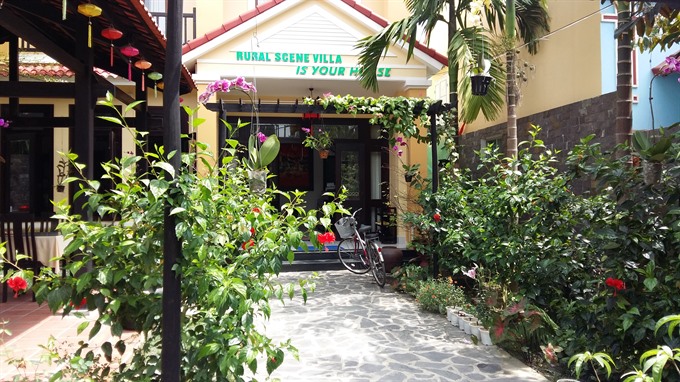 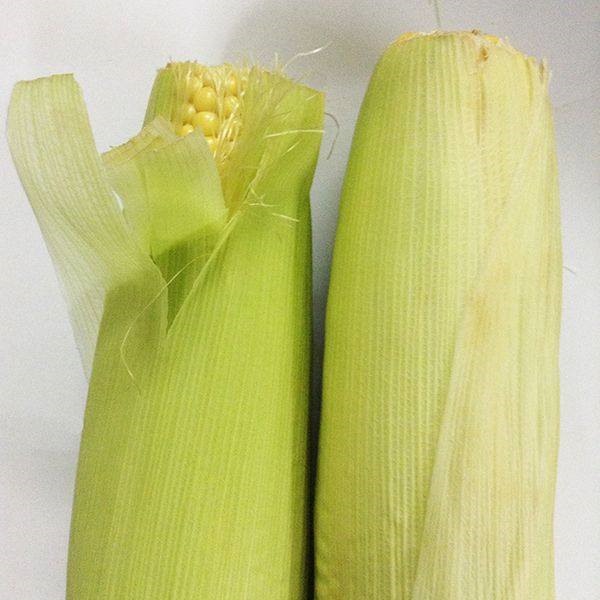 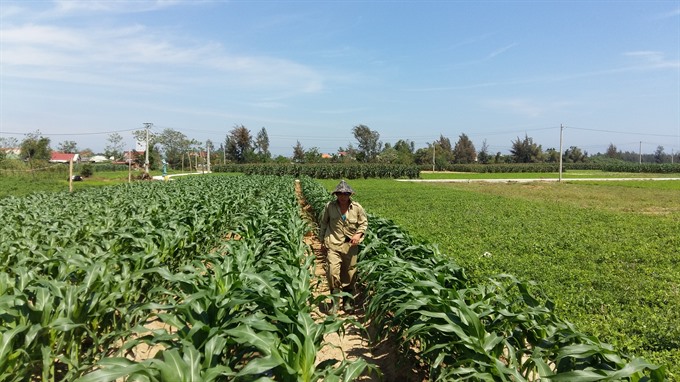 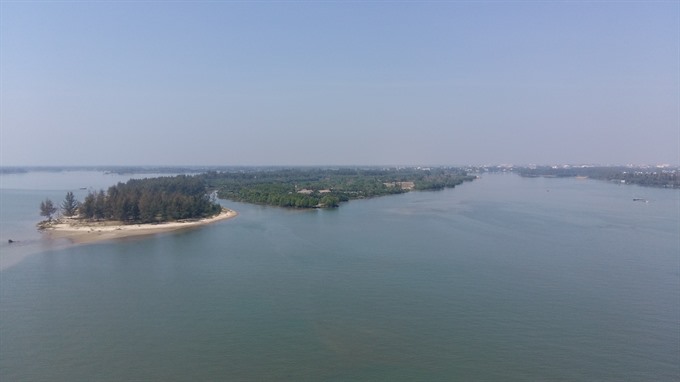 Unique setting: Cẩm Nam Commune is created from a sandbank in the middle of the Thu Bồn River in Quảng Nam Province. The commune has turned into an eco-tourism site in Hội An City.

Local villagers have gradually shifted their work away from pure food production to tourism and services based on farming.

“Tourism has been developing in the last five years in the rural areas of Hội An, including Cẩm Thanh, Cẩm Kim, Trà Quế and Triêm Tây. We have also changed,” said Phạm Kiêu, chairman of the Cẩm Nam Commune People’s Committee.

“Community-based tourism is an option for sustainable development when villagers can earn more from their farms if they offer farm produce as well as tourism services,” Kiêu said.

He said home-stays, fisheries and handicrafts contribute 82 per cent to the communal coffers each year. Tourism started booming in the commune in 2013.

“The Cồn Bắp Eco-Resort, which opened last year on 27ha of land with total investment of $42 million, will provide 142 hotel rooms, a restaurant, a township residential area, and a museum in 2019,” Cư said.

He said the commune plans to pilot organic farming to serve tourists.

“We reserve 30ha of land for hi-tech and organic farming, in combination with community-based eco-tourism services. This means that farmers still work on their farms, but they could earn more from tourism,” Kiêu said.

Chairman of Cồn Bắp eco-tour company Đỗ Anh Tuấn suggested that Cẩm Nam commune should be developed as an eco-tourism site rather than an urban area.

“The commune is a nice place for tourism, but not for real estate sales and high-rise concrete buildings. The uncontrolled construction of concrete would damage the rural lifestyle of the centuries-old village,” Tuấn suggested.

He said transport infrastructure was needed to connect Cẩm Nam with Hội An, Tam Kỳ and Đà Nẵng to facilitate travel for tourists.

“Organic farming is a long-term target, while safe food farms will be the initial preparation steps in reaching the final target,” Kato said, emphasising that the strict standards of organic farming, which use no chemical fertilisers or pesticides, create a higher barrier to entry than safe food farms, which use some chemical pesticides but only with strict regulations.

“Rural areas in Hội An and Việt Nam should not strive for the impossible and focus on organic farming, but establish safe food gardens for healthy people first. If you succeed in safe farms, you build a foundation to reach organic standards,” he said.

“Safe farms would lure more tourists who visit Hội An, and it helps build up agriculture brand along with tourism. You should show the international tourists how special your farms are, and what things they can enjoy when staying here,” he added.

“The mussel is raked by local fishermen on the sandbank of the Thu Bồn River early in the morning. It’s a daily food for family, but the food has become a specialty of the village amid the tourism boom in Hội An,” Chung said.

Some boat owners have gradually developed cruise services along the Thu Bồn River and Hội An town, while home-stays have emerged as a profitable service in the commune.

“A group of 60 fishermen has shifted into boat service for sunset cruising or fish catching in the Thu Bồn River,” Chung said.

He said the commune’s fleet of 60 boats caught 3,700 tonnes of fish and seafood each year for some $4 million in revenue.

Lâm Thị Sơn Thủy, the owner of a newly built villa in Cẩm Nam, said her family could earn VNĐ150 million ($6,600) per month from tourism service.

“I hope a new bridge will cross the Thu Bồn River to smoothe traffic for bicycle riders from Hội An to Cẩm Nam. The old bridge is too small and jammed during rush hours,” Thủy said.

“Our busy fishing port, green and tranquil fields and friendly farmers will offer real adventure trip for tourists when visiting the village just a few minutes by bike from Hội An,” she added. — VNS