The tourism sector in Hoi An Province has recovered well a month after reopening on June 1 from the Covid-19 social distancing period. 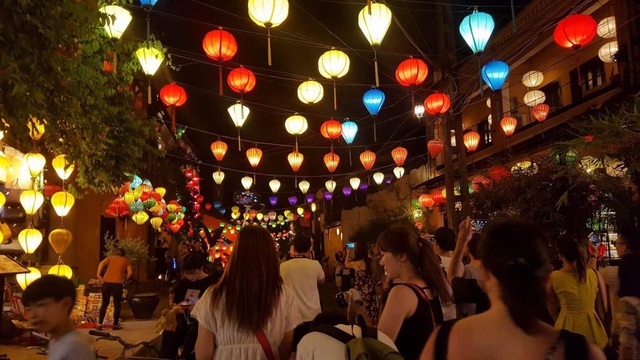 Statistics from Hoi An Centre for Culture, Sports, Broadcasting and Television showed that from June 1 to July 4, 592 tickets to the old town were sold to the foreign visitors and 20,359 tickets sold to domestic tourists. From June 1 to June 22, up to 888 tickets to Thanh Ha Ceramic Village and 203 tickets to Tra Que Vegetable Village were sold. The number of tickets sold to Bay May Coconut Forest was 200 during the weekdays and 250-300 tickets during the weekends.

Truong Thi Ngoc Cam, head of the centre, said, "More people are returning to Hoi An. However, many tour agents haven't selected Hoi An as a potential destination during this time because the policy of ticket fee exemption and reduction for tourist spots managed by the state hasn't been approved yet."

Hoi An authorities have launched several stimuli and discount programmes to attract tourists. Nearly 90% of the city's accommodation facilities have reopened and received an average of 650 customers every night from Monday to Thursday and 2,500 customers from Friday to Sunday. On Saturday, the city had up to 4,700 overnight visitors. Most of the visitors are from Danang while the rest are from HCM City and Hanoi.

Nguyen Van Lanh, head of Culture and Information Department of Hoi An, "Facilities with over 20 rooms operate mostly during the weekends. Visitors often stay at homestay, villa and coastal accommodation. But the number of tourists is still not enough to pay for operational costs so many facilities may close again."

Hoi An streets have become colourful again after the social distancing period with many stores, cafe bars and lanterns along the streets. The city has been voted as one of 15 world's top cities by Travel and Leisure's readers in 2018 and ranked third among the most wonderful cities across the globe by Travel and Leisure in 2020.

Hoi An is also known for its cuisine and grand entertainment venues besides traditional villages like Kim Bong Carpentry Village and Cham Island. Nguyen Thi Anh Dao from HCM City said, "Many people don't like to travel far now. But I chose to go to Hoi An because I trust that they will keep us safe and there are many wonderful locations to explore. I think I was right."
dtinews.vn