This ancient town on the Vietnamese coast has charm, history and beauty to spare. It is also budget-friendly, and for foodies, a delight. 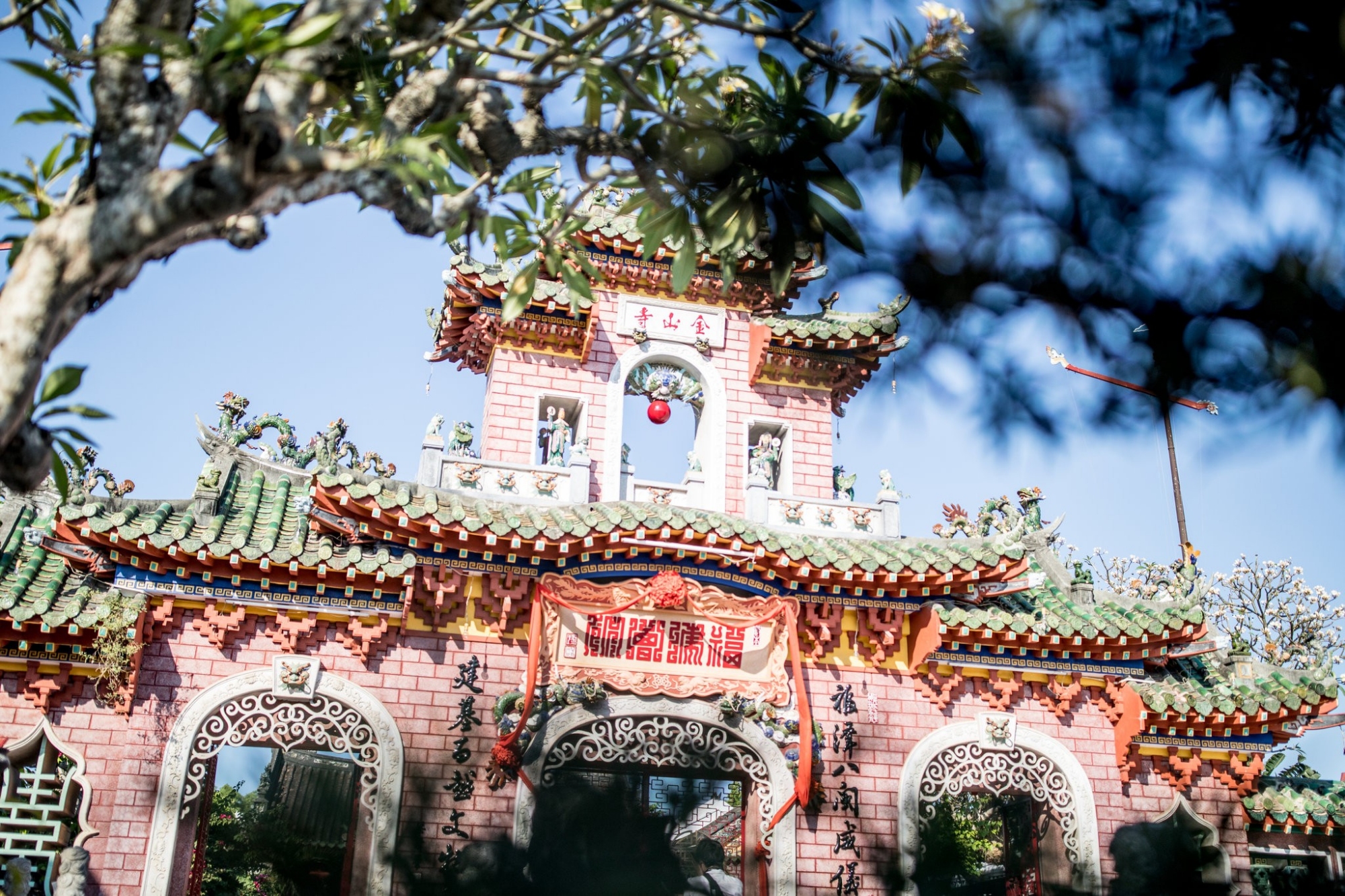 Situated on the coast of central Vietnam, the former commercial port of Hoi An offers endless wonders, from fishermen launching bamboo basket boats along palm-fringed beaches, to farmers in conical hats harvesting rice in swathes of green paddies. But the marquee attraction is the well-preserved ancient town, brushed mustard yellow and festooned with colorful silk lanterns. Many of the wooden merchant houses and ornate temples and assembly halls — a fusion of styles from China, Europe and Japan — date back to Hoi An’s prime in the 1700s. By the early 1800s, though, the river port was supplanted by Danang to the north, and largely forgotten. Unesco World Heritage site status in 1999 boosted a revival, and in recent years mass tourism has landed hard, with multitudes of tour buses and resorts. Still, Hoi An holds plenty of charm, with budget-friendly prices and a vibrant gastronomic scene.

Many of the narrow, two-story shophouses have been repurposed with restaurants, cafes and a glut of tailor and leather shops. But several have been frozen in time and opened to tourists, like the two-century-old Tan Ky house. Start your old town tour here (120,000 dong, or about $5.15, for entry to five of the more than 20 historic sites), and roam its 100-foot length, past intricately carved columns and beams, through the open-roof courtyard, to a wall in the back, marked with the height of fall floods. Next up is Phuc Kien, one of five assembly halls built by Chinese merchants to plot trade deals and honor ancestors. Its sea goddess temple holds an unforgettable life-size statue of an aquamarine-skinned immortal with protruding ribs and bulging white eyes. End up at the Japanese covered bridge, an arched pagoda built in 1593 and later reconstructed by the Chinese and Vietnamese. Its roof is adorned with the town’s ubiquitous alternating rows of yin yang tiles.

Spinning and selling silk to foreign traders was a thriving business in Hoi An centuries ago. Now the transactions occur inside more than 600 tailor shops. The quality and fit can be hit or miss. (Bring a favorite garment to be copied and allow time for alterations; turnaround is within 24 hours. My wife was thrilled with silk pants, 940,000 dong each, from Le Le Cloth Shop.) If you’re more interested in the silk-making process, stop by Thang Loi for a tour and watch how silkworms munch on mulberry leaves and create cocoons that yield nearly 1,000 yards of thread, woven on a clacking loom.

Since he first traveled to Vietnam 27 years ago, Didier Corlou has been on a mission to promote its cuisine through his cookbooks and restaurants in Hanoi. Now the renowned French chef is serving up his passion in Hoi An at Co Mai. Opened last year with his co-chef wife, Hoang Phuong Mai, the restaurant fittingly occupies a former spice house. The tasting menu (395,000 dong) is your best bet for a bounty of “Hoi An on the plate,” as Mr. Corlou puts it. Recently, the fresh and flavorful mains of braised pork, Saigon Marseille curry and barracuda in banana leaf followed starters like banana flower salad with chicken, and fried rolls with mackerel and pork and mushroom. Save room for the dessert tray that includes mango sorbet and banana cake with caramelized cream.

The town starts to shut down around 9 p.m., but a few bars stay open late. Watch boat owners coax tourists onto the river from the curbside tables at Shamrock Irish Pub, which features a craft stout from Saigon’s Heart of Darkness brewery, or shoot pool to classic rock at the Dive Bar on Nguyen Thai Hoc street. The closest thing to a speakeasy is Tadioto, a new whisky bar in the French Quarter. It’s hidden behind An Store clothing boutique, which leads to Tadioto’s sushi counter in the stone courtyard and then to the elegant bar in the back. Sip Tadioto’s namesake scotch (180,000 dong) or Suntory’s Hibiki (250,000 dong). Open till midnight. (Nguyen Qui Duc, the owner, is set to open a Japanese grill and beer garden next door in the spring.)

Most hotels and home-stays include bikes, so cycle out to the rice paddies between the town and the beach and marvel at acres of green patched with shrimp and fish ponds. Ride along sandy paths under canopies of coconut trees, past lolling water buffalos and farmers ushering flocks of ducks into narrow canals. Pull into the Tra Que Vegetable Village, organic gardens where you can take an 8 a.m. tour and learn how to till the sandy soil and plant red leaf lettuce before sampling just-picked greens at breakfast in the shade of the outdoor cooking school and cafe. The waiters will show you how to assemble a roll of rice-flour-and-egg pancake with mint, lemon basil and lettuce. Tour and breakfast 280,000 dong.

Coffee in Vietnam is a sit-down affair, often on a sidewalk at child-size plastic chairs and tables. For a delightful twist on the traditional condensed milk iced coffee, take a seat riverside at Cong Caphe, with its Communist army décor, for a coconut-milk-and-cream coffee smoothie (45,000 dong). For a more refined coffee break with larger chairs, try Mia Coffee amid a low-slung row of French colonials on Phan Boi Chau street. Le Quang Huy, the owner, sources beans from the mountains of Dalat, roasts them on site and compresses cappuccinos (37,000 dong) and traditional Vietnamese brews (30,000 dong) with a machine from Seattle.

Hoi An is known for several local dishes like white rose dumplings and chicken rice. Most emblematic of its multicultural past is Cao Lau — with the flavors of Japan in the thick rice noodles, China in the soy pork and France in the rice flour croutons. Try it at Hoi An Market. Barnlike, it stretches from the river, where a riot of tables loaded with papaya and dragon fruit lead to the raw meat counters inside, then to stalls loaded with incense and spices, and women napping on benches (it opens at 6 a.m.) The main hall is filled with about 60 brightly lit glass hutches stocked with spring rolls and plates of orange shrimp. Perch at the metal counter at No. 50 and plop fresh greens into a bowl of cao lau spiced with red chili paste. Lunch for two 150,000 dong.

Take a truncated tour of Vietnam’s ethnic communities at the Precious Heritage Museum, opened in 2017 by the French photographer Réhahn. He spent eight years traveling to 53 of the country’s 54 ethnic groups, photographing villagers and collecting costumes, including a tree bark jacket on display upstairs. The free museum in the French Quarter is also a gallery of Réhahn’s portraits, on sale as postcards for 30,000 dong, up to large, metallic paper prints for tens of thousands of dollars. If he’s there, he’ll share the backstory of his most famous shot, “Hidden Smile,” a close-up of a puckish woman in a conical hat covering her forehead and mouth with her hands. The portrait was presented to President Emmanuel Macron of France by Communist officials last year. On most mornings the subject, 80-year-old Bui Thi Xong, is on the river in Hoi An (near Cargo restaurant) offering rides in her row boat.

Even if you didn’t mean to, you may find yourself in one of Trinh Diem Vy’s eight restaurants in and around the old city. Definitely make it to Vy’s Market. Its food-court-meets-street-cart setup has 200-plus traditional dishes, from steamed pig brains to monk fish curry. Try the beef rolled in betel leaves (105,000 dong) and the pumpkin curry served in the gourd (85,000 dong). As tasty as those are, do not miss the squid stuffed with pork (175,000 dong). The meat is minced with mushrooms and spring onions and peppered with spices, and the pan is caramelized by the fried squid skin.

After dinner, step into the side street and Hoi An’s main night market. Zigzag through the banana pancake carts and shuffling tour groups, to a row of stalls alight with silk lanterns. Make your way across the footbridge (mind the bikers pedaling through the throngs) to a small square with elevated bamboo huts where locals gather for a sort of singing bingo. On certain nights, you’ll find families curbside at metal drums burning fake money and other offerings for ancestors. Every night, you’ll find touts offering river rides. For 120,000 dong for 15 minutes, step into a little wooden boat, join the flotilla and watch an oil painting come to life, the profusion of lanterns on the boats and river bank reflecting on the dark, crinkled water.

Within a half-hour drive of Hoi An, you can ride a basket boat through river channels.CreditJustin Mott for The New York Times

Within a half-hour drive of the ancient town, you can ride a basket boat through river channels thick with water coconut trees or climb the steps of the Marble Mountain into caves with towering Buddhas. This being a beach town, why not just relax at Tan Thanh Beach? Not as busy as An Bang Beach to the north, this stretch of sea and sand is mesmerizing with a moderate surf, and view of the Cham Islands on the horizon. You can’t go wrong with a coffee or a smoothie at Salt Pubor Sound of Silence, where you can use the lounges and thatched gazebos and on a clear day see the skyscrapers of Danang in miniature up the coast.

Some of the best discoveries are along the narrow walkways off the ancient town. That’s where you’ll find Nu Eatery, just west of the Japanese bridge, in a distressed looking former house with three small rooms and a balcony for dining. Phuc Ngo honed his craft at restaurants in New York City before returning to Vietnam in 2014 to open Nu. He calls it modern Vietnamese, which like American food, is “a mix of everything,” he said. That produces delectable dishes like avocado salad with sweet potato, fried egg and lima beans; vegetarian rice with charred eggplant, mustard greens and mushrooms, and steamed buns with pork belly, pickles and spicy mayo. Lunch for two, 270,000 dong.