Ri is one of the oldest craftsmen still maintaining the trade in the village founded in the 15th century.

Ri fears that the village's traditional craft will disappear in the next few years because few young people wish to learn the craft. 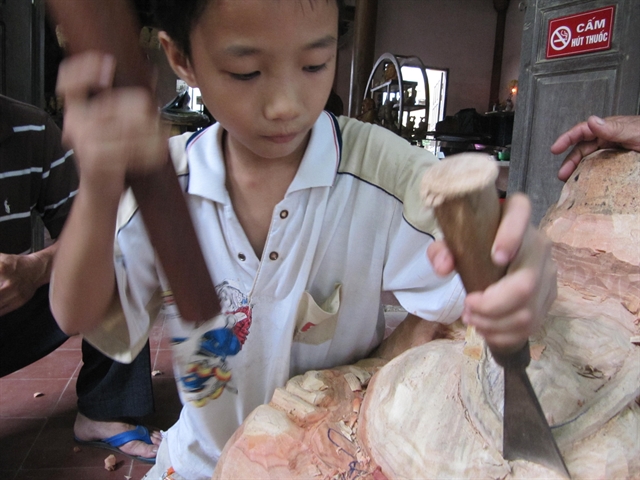 A boy practises wood sculpture at a carpentry workshop in Kim Bồng Village of Hội An ancient town. The village still preserves the centuries-old trade.

He was the first and the only man from the village to gain artisan recognition in 1984 and has helped train about 100 local young people since 1997 with funding from UNESCO to preserve the trade.

However, young people gravitate towards more profitable jobs in the tourism sector in Hội An, while the craft takes at least three years to learn and then a couple of years practising to become skilled.

“A skilled carpenter could earn VNĐ400,000 (US$17) from daily labour with orders, but it’s unstable. Meanwhile, tourism service jobs like tour guides, receptionists and logistics works earn more and the jobs are easier,” Ri said.

“It’s a hard job. Carpentry requires skill and patience from learners as well as practising for years. We can't persuade young people to learn our skills because they want a stable future,” he explained.

The number of carpenters has declined 30 per cent in the last two decades, and only 100 carpenters and carvers are still active.

Nguyễn Tấn Nguyên, Ri’s 30-year-old grandson, has worked at the family workshop as one of the main carvers in the village since 2009.

Nguyên doesn't focus on woodwork for houses but on skilful sculpture. 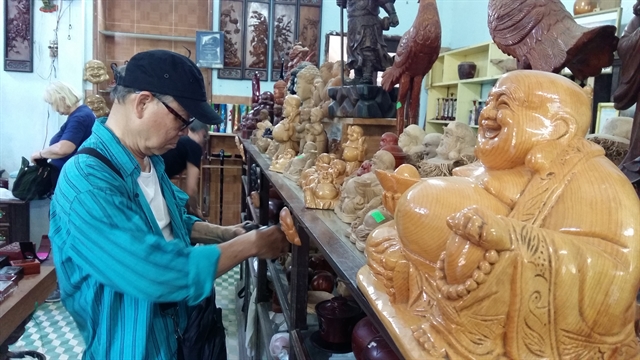 A tourist visits a wood souvenirs shop at Kim Bồng village in Hội An. The village has been known as a carpentry village and a craft destination in Hội An.

"House woodwork and boat making and furniture need carpenters, while sculpture requires skilled fingers and hands. I do many Buddha wooden statues for interior display in homes or pagodas,” Nguyên said.

He said only 30 sculptors in the village could make traditional wooden houses – a unique design of Kim Bồng from the 15th century – or restoration projects for century-old pagodas and temples. 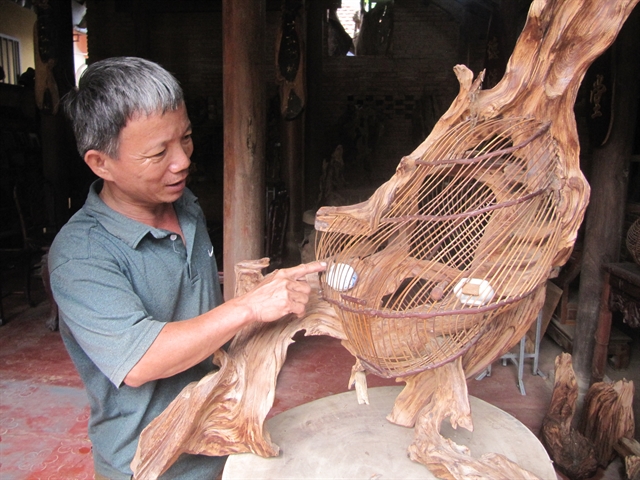 Huỳnh Sướng, a master of wood sculpture at Kim Bồng carpentry village, introduces a wood creation from a trunk at his family workshop. The village has around 30 skilful wood carvers.

Ri's son Huỳnh Sướng, 51, manages two workshops at the village that make furniture for export and souvenirs for tourists.

"We export furniture to Australia, France, the UK and the US, but souvenir designs are still limited to Buddha statues, dragons, unicorns, tortoises and phoenixes," Sướng explained.

Sướng said his workshop received support from the UN culture agency in 2012-13 to promote the production and design with wood arts and crafts.

However, local craftsmen still struggled to advertise their products in connection with hotels, restaurants and resorts. 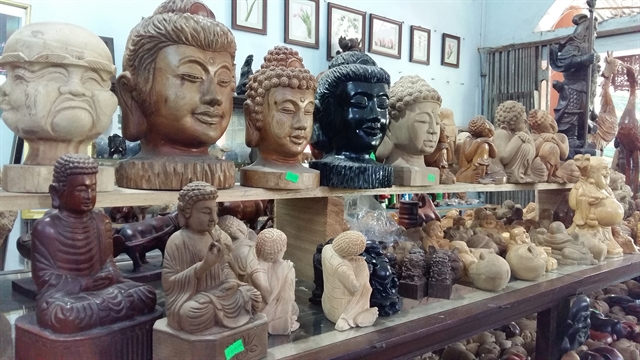 Tourists were drawn to the rural lifestyle and tranquil scenery of villages just a score of minutes bike ride from Hội An.

However, a larger mass tourism boom and poor management in the late 2000s created chaos and property speculation in suburban Hội An.

“Property speculators flocked to the village to buy farmland and gardens from local farmers to build villas and hotels for sale or rent,” Sướng said.

“Villagers gradually left their homeland for the money from land speculators. They (farmers) could hardly earn big amounts from crafts to support their children’s education. The land speculators built multi-storey shopping areas and hotels in village centres,” he explained.

“An urban population and lifestyle temporarily settled in the village, not for living, but for profit. That’s why the village has struggled to lure tourists due to the faded rural lifestyle and craft activities,” he added.

Artisan Ri said the village was busy with carpentry in the past, but few households have preserved the trade.

“The village needs a carpentry work demonstration centre to draw tourists, while typical wooden houses from the 15th century must be restored,” Ri suggested.

Hội An has approved an eco-tour and craft project to promote Kim Bồng Village as a destination in the eco-tour chain of the most popular sites among the garden village of Trà Quế, the nipa palms of Cẩm Thanh Village, and Thanh Hà pottery village.

Kim Bồng, situated in the buffer zone of the Chàm Islands-Hội An world biosphere, has a vast sandbank and river ecological system for eco-tours.

A bridge project is underway to make travel between Hội An and Kim Bồng easier, which will also promote links to Thanh Hà pottery village.

“Tourists can find different vehicles visiting Kim Bồng and the Thu Bồn River ecology system from Hội An by boat, walking, bike, motorbike and car. Farmland in the village is a base in the eco-tour model and sustainable development,” said Phan Xuân Thanh, from Emic Hospitality Hội An travel agency.

“Tourism will help local craftsmen preserve their crafts, land and livelihood as well as the rural lifestyle they inherited,” Thanh said.

“Tourists come to the village not for luxury accommodation, but they want to explore the lifestyle of a rural family and a demonstration of carpentry work. It’s a unique value and attraction,” Trinh said.

“The regular activities of rural families in Kim Bồng would lure tourists. Men do woodwork as a major breadwinner in a family, while women cover farm production and cooking. The villagers often live in timber houses – a design that is comfortable in the seasonal climate in the Thu Bồn River basin.”

Nguyễn Chí Trung, director of Hội An's Centre for Cultural Heritage Management and Preservation, said the city had been seeking different programmes to preserve the craft.

"Carpentry trade is among top priorities for preservation alongside pottery, lanterns and silk production." 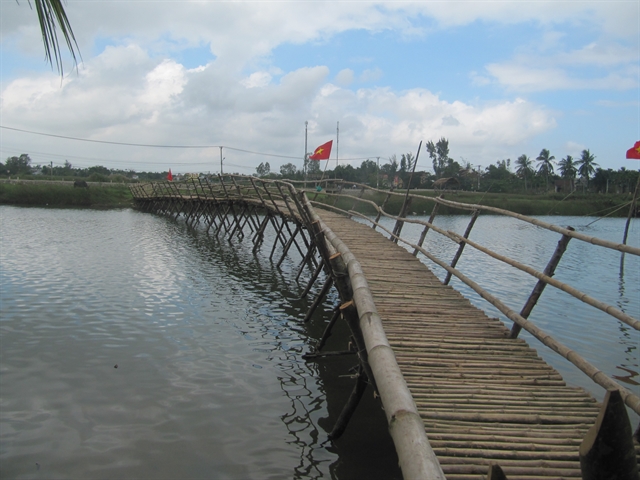 A bamboo bridge spans over a channel connecting Kim Bồng village with a sand islet in the middle of the Thu Bồn River.

Sướng said carpenters of the village should live well from their trade so the centuries-built craft would be preserved.

He said skilled craftsmen needed regular financial support as a stable basic income for craftsmen to restore the trade while nurturing young craftsmen in the village.

Sướng said his family still earned well from the trade due to regular export orders from Australia and the US.